INTRODUCTION: Elimination of micro-organisms from the root canal system is one of the most important objectives of RCT 1. Enterococcus faecalis is the most frequently found microorganism in the root canal, and it is resistant to current treatment modalities in endodontics. So success rate of root canal treatment is reduced due to the presence of this bacteria 2, 3. For a successful endodontic therapy, it is necessary to obturate the root canal to get the fluid tight seal of the apical foramina and accessory canals.

Presence of microbes in the dentinal tubules can be counteracted by the antimicrobial properties of sealing and obturating materials 4. Endodontic sealers are used to prevent periapical exudates from diffusing into unfilled part of the root canal and to prevent residual bacteria from reaching periapical tissues 5. Antibiotics can be administered both systemically and locally. Systemically administered antibiotics have some complications such as toxicity, allergic reaction, and development of resistant strains of microorganisms.

The main advantage of the usage of local antibiotics is that systemic complications are prevented and that substantially higher concentrations can be used. Enterococcus faecalis is susceptible to various antibiotics such as amoxicillin, vancomycin, erythromycin, etc.

So, the aim of the present study is “to evaluate and compare microbiologically the antibacterial activity of Endodontic sealers by addition of antibiotics against Enterococcus faecalis."

MATERIALS AND METHODS: Two root canal sealer were tested for antimicrobial activity against Enterococcus faecalis. The bacteria were cultivated in the solid media, the suspension containing Enterococcus faecalis was spread on the Petri dishes containing Mueller-Hinton Agar medium. Inoculated plates were dried for 15 min at 37 degree Celsius.

Each plate was divided into 3 sections, in each section of each plate, a well of 5 mm in diameter was created with a sterile stainless steel cylinder. Sealer samples were prepared by adding 10% of antibiotic to powder/paste of the sealers weight and were mixed according to the manufacturer’s instructions.

The plates were incubated aerobically at 37 degree Celsius for 24 h. Mean zone of inhibition of all the sealer antibiotic combinations were measured. 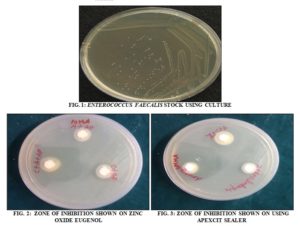 RESULTS AND DISCUSSION: The antimicrobial activity of root canal sealer – antibiotic combination on Enterococcus faecalis was tested by agar well diffusion technique. With zinc oxide eugenol combined with clindamycin and amoxicillin, the zone of inhibition was (36mm), which was greater when compared to sealer alone and sealer combined with an antibiotic.

Similarly with apexcit combined with clindamycin and amoxicillin showed a zone of inhibition of (46 mm). 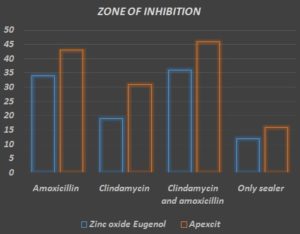 FIG. 4: SHOWS THE ZONE OF INHIBITION CAUSED BY USING AMOXICILLIN AND CLINDAMYCIN AS ANTIBIOTIC

Multiple factors contribute to the endodontic failures, which include intra radicular infection, extra radicular infection, foreign body reaction, and cysts 6, 7. However, it is believed that most treatment failure occurs due to the survival of microorganisms in the apical portion of the root filled tooth 9. The persistence of bacteria in the root canal system often leads to failure of root canal treatment 8. Enterococci have been shown to survive in root canals as single organisms, and it is associated with persistent apical inflammation in clinical situations, and also it is difficult to eliminate this organism from the root canal system. Agar diffusion method was used in this study, in this method the antibiotics &antibacterial agents from the sealers comes out through the disc and acts on the culture causing the formation of the clear zone known as ‘Zone of Inhibition.’

Holescher et al. 10 found that the sealer-antibiotic groups exhibited antimicrobial activity peaking around 10% concentration of antibiotic. Hence in the present study, 10%, antibiotic concentration was used. EF is resistant to clindamycin and sensitive to amoxicillin. Kaplan and others 11 have stated that the most effective antimicrobial sealers contain eugenol and formaldehyde. Root canal sealers with integrated calcium hydroxide, such as Sealapex, apexcit have enhanced antibacterial activity 12. The antimicrobial effect of this sealer is produced by the release of hydroxyl ions, which increases the pH above 12.5.

CONCLUSION: All antibiotic agents, when added to Endodontic sealer showed increased antibacterial activity against Enterococcus faecalis. All the sealer-amoxicillin combination showed the maximum zone of inhibition than the sealer- Clindamycin combination. In the present study we conclude that apexcit sealer has increased antibacterial effect than zinc oxide Eugenol as a sealer.