ABSTRACT: Diabetic nephropathy is the leading cause of chronic kidney disease in patients starting renal replacement therapy. Dialysis is the artificial process of getting rid of waste (diffusion) and unwanted water (ultrafiltration) from the blood. This process is naturally done by our kidneys. Dialysis may be used for people who have become ill and have acute kidney failure (temporary loss of kidney function), or for fairly stable patients who have permanently lost kidney function. In dialysis patients, parameters like glucose, creatinine, total protein concentration, triglycerides, and albumin levels are frequently changed before and after the dialysis. The mean values of glucose have far related to the values taken after the dialysis. The mean values are 144.544, 89.082, and 1.545, 1.465 for glucose and creatinine before and after the dialysis.

INTRODUCTION: Diabetic nephropathy is a nephritic syndrome and diffuses glomerulo-sclerosis. It is due to long-standing diabetes mellitus and is a prime cause for dialysis. The syndrome can be seen in patients with chronic diabetes (15 years or more after onset), so patients are usually older (between 50 and 70 years old). The disease is progressive and may cause death two or three years after the initial lesions, and is more frequent in men. Diabetic nephropathy is the most common cause of chronic kidney failure and end-stage kidney disease. People with both type 1 and type 2 diabetes are at risk. The risk is higher if blood-glucose levels are poorly controlled.

Further, once nephropathy develops, the greatest rate of progression is seen in patients with poor control of their blood pressure. Also, people with a high cholesterol level in their blood have much more risk than others. The earliest detectable change in the course of diabetic nephropathy is a thickening in the glomerulus. At this stage, the kidney may start allowing more serum albumin (plasma protein) than normal in the urine (albuminuria), and this can be detected by sensitive medical tests for albumin. This stage is called “microalbuminuria”. As diabetic nephropathy progresses, increasing numbers of glomeruli are destroyed by nodular glomerulosclerosis. Now the amounts of albumin being excreted in the urine increases, and may be detected by ordinary urinalysis techniques.

The first laboratory abnormality is a positive microalbuminuria test. Most often, the diagnosis is suspected when a routine urinalysis of a person with diabetes shows too much protein in the urine (proteinuria). The urinalysis may also show glucose in the urine, especially if blood glucose is poorly controlled. Serum creatinine and BUN may increase as kidney damage progresses.

Blood-glucose levels should be closely monitored and controlled. This may slow the progression of the disorder, especially in the very early (“microalbuminuria”) stages. Medications to manage diabetes include oral hypoglycemic agents and insulin injections. As kidney failure progresses, less insulin is excreted, so smaller doses may be needed to control glucose levels. Diet may be modified to help control blood-sugar levels. Modifications of protein intake can affect hemodynamic and no hemodynamic injury.

Dialysis may be necessary once the end-stage renal disease develops. C-peptide, a by-product of insulin production, may provide new hope for patients sufferings from diabetic nephropathy continues to get gradually worse. Complications of chronic kidney failure are more likely to occur earlier and progress more rapidly when it is caused by diabetes than other causes. Even after initiation of dialysis or after transplantation, people with diabetes tend to do worse than those without diabetes.

Dialysis is the artificial process of getting rid of waste (diffusion) and unwanted water (ultrafiltration) from the blood. This process is naturally done by our kidneys. Some people, however, may have failed or damaged kidneys which cannot carry out the function properly – they may need dialysis.

When we are healthy, our kidneys regulate our body levels of water and minerals and remove waste. The kidneys also produce erythropoietin and 1.25-dihydroxycholecalciferol (calcitriol) as part of the endocrine system. Dialysis does not correct the endocrine functions of failed kidneys – it only replaces some kidney functions, such as waste removal and fluid removal. Dialysis and altitude – A study found that death rates for dialysis patients are 10% - 15% lower for those whose homes are higher than 4,000 feet, compared to those who live at sea level. Some countries, such as the UK, are predicting a doubling of the number of patients on the dialysis machine.

Approximately 1,500 liters of blood are filtered by a healthy person’s kidneys each day. We could not live if waste products were not removed from our kidneys. People whose kidneys either do not work properly or not at all experience a build-up of waste in their blood. Without dialysis, the amount of waste products in the blood would increase and eventually reach levels that would cause coma and death. Dialysis is also used to rapidly remove toxins or drugs from the blood. Diabetic nephropathy is the leading cause of end-stage renal disease worldwide and is associated with increased cardiovascular risk. The earliest clinical manifestation is of microalbuminuria. Tight blood glucose and blood pressure control reduce the risk of microalbuminuria.

Once microalbuminuria is present, the rate of progression to end-stage renal disease and of cardiovascular disease can be delayed by aggressive management of blood pressure, glucose, and lipids. Inhibition of the renin-angiotensin system is important to reduce intraglomerular pressure, but other classes of the antihypertensive agent may also be needed to gain adequate control of systematic blood pressure. Such measures can at least half the rate of progression of nephropathy and cardiovascular disease.

Glucose in the Development of Diabetic Nephropathy: Epidemiologic studies have demonstrated that DN risk is higher in patients with poor metabolic control (2–5). Although it is clear those genetic factors modulate DN risk and that some patients escape this complication despite decades of poor glycemic control (1–4), it is also clear that hyperglycemia is a necessary precondition for DN lesions and renal functional disturbances to develop. Indeed, the two major early glomerular lesions, glomerular basement membrane (GBM) thickening, and mesangial expansion are not present at diagnosis of diabetes but are found 1 to 4 yr after onset of hyperglycemia 1. Additional support for the concept that hyperglycemia is necessary for the development of diabetic glomerulopathy is provided by studies in identical twins who are discordant for type 1 diabetes. In these families, the kidneys of the non-diabetic members of the twin pairs were structurally normal, and in each instance, GBM and mesangial measures were greater in the twin who had diabetes in the pair 5.

Furthermore, normal kidneys from no diabetic donors that are transplanted into patients with diabetes develop all of the lesions of DN 6, 7. Finally, patients who had type 1 diabetes and were randomly assigned to receive maximized glycemic control in the first 5 yr after kidney transplantation did not develop mesangial matrix expansion, whereas this occurred in patients who were randomly assigned to receive standard glycemic control 8.

This study, along with the very large multicenter Diabetes Control and Complications Trial (DCCT), which documented that patients who were randomly assigned to strict control had lower incidences of microalbuminuria and proteinuria after 7 to 8 yr of follow-up 9, proves the role of glycemia as a risk factor for nephropathy in type 1 diabetes. Similar trends were seen for the prevention of microalbuminuria and proteinuria in the large.

MATERIALS AND METHODS: We select diabetic nephropathy patients and collected the blood before and after dialysis. After collecting the blood samples, we estimate the blood glucose levels. Blood collected in a clean, dry test tube. Serum or plasma is separated from the cells at the earliest possible, as the rate of glycolysis is approximately 7mg% per hour at room temperature. Sodium fluoride is preferred as anticoagulant due to its antiglycolytic activity. Glucose is stable for 24 h in neatly separated plasma and serum.

Procedure: 1 ml of glucose oxidase was taken in a test tube, and 5 µl sample was added to it and allowed to incubate at room temperature for 10 min. The color developed, and the concentration was read at 540 nm using a standard concentration of 100 mg/dl.

Creatinine is a waste product of creatine, which is meanly found in the muscle tissue serving as a high energy reservoir. In serum, creatinine concentration depends exclusively on the kidney function; elevated levels in serum creatinine are specific for kidney diseases. Creatinine is removed from the blood chiefly by the kidneys, primarily by glomerular filtration but also via proximal tubular secretion. There is little or no tubular reabsorption of creatinine. If the filtration in the kidney is deficient, creatinine blood levels rise. Therefore, creatinine levels in blood and urine may be used to calculate the creatinine clearance (CrCl), which correlates with the glomerular filtration rate (GFR). Blood creatinine levels may also be used alone to calculate the estimated GFR (eGFR).

Creatinine is a waste product of creatine, which is meanly found in the muscle tissue serving as a high energy reservoir. In serum, creatinine concentration depends exclusively on the kidney function; elevated levels in serum creatinine are specific for kidney diseases.

The Principle Involved in Creatinine Estimation: Creatinine reacts with picric acid in alkaline conditions to form a yellow complex which absorbs 500 nm. The rate of color formation is to the creatinine concentration in the sample. We use the Ident creatinine kit for the estimation of creatinine in the serum. Reagents used in this study are reagent 1 (sodium hydroxide 0.4 mmol/L), reagent 2 (picric acid 25 mmol/L) and standard. 5ml: glucose-100 mg/Dl, urea 50mg/dL, creatinine 2 mg/dl. The optimum density (O.D) values are given in Table 1 and represented in the graph.

TABLE 1: LEVELS OF GLUCOSE IN DIABETIC NEPHRO-PATHY PATIENTS BEFORE AND AFTER DIALYSIS 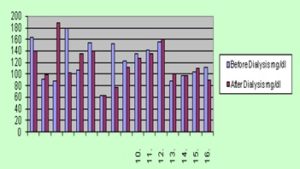 FIG. 1: LEVEL OF GLUCOSE IN DIABETIC NEUROPATHY PATIENT BEFORE AND AFTER DIALYSIS

Creatinine is a waste product of creatine, which is meanly found in the muscle tissue serving as a high energy reservoir. In serum, creatinine concentration depends exclusively on the kidney function; elevated levels in serum creatinine are specific for kidney diseases.

The Principle Involved in Creatinine Estimation: Creatinine reacts with picric acid in alkaline conditions to form a yellow complex which absorbs 500 nm. The rate of color formation is to the creatinine concentration in the sample. We use the Ident creatinine kit for the estimation of creatinine in the serum. 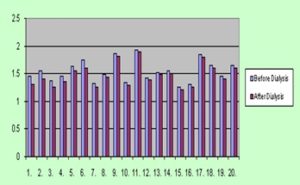 FIG. 2: LEVEL OF CREATININE IN DIABETIC NEUROPATHY PATIENT BEFORE AND AFTER DIALYSIS O.D. VALUES

TABLE 2: LEVELS OF CREATININE IN DIABETIC NEPHROPATHY PATIENTS BEFORE AND AFTER DIALYSIS

ACKNOWLEDGEMENT: I would like to thanks to my supervisor Dr. M. Jagadish Naik and my co-scholars B. Suresh, D. Madhu Prasad and A. Samba Naik.