ABSTRACT: Omega 3 fatty acid is one such dietary supplement, known to modulate the host response is chronic conditions like cardiovascular disease, rheumatoid arthritis, ischemic cerebrovascular disease, osteoporosis by producing resolvins and proteins without any side effects; periodontitis is an infectious disease caused predominantly bygram-negative anaerobes. The effect of dietary supplementation with omega 3 fatty acid as a host modulating agent with chronic periodontitis. This review is going to reveal about the omega 3 fatty acid, which helps to reduce the periodontitis.

INTRODUCTION: Periodontal disease is defined as an inflammatory condition of the gingival tissues, characterized by loss of attachment of the periodontal ligament and the bony support of the tooth. It is caused by Gram‐negative periodontopathic infection along with a disproportionate unchecked host‐mediated response to the dental biofilm 1.

Traditional therapies for periodontitis focus on bacterial infection. More recent therapeutic strategies have targeted the host response, which may play a more crucial role in the pathogenesis and its associated systemic effects 2. Omega-3 fatty acids (N-3s), such as eicosapentaenoic acid and docosahexaenoic acid (DHA), have anti-inflammatory properties.

In a recent study, eicosapentaenoic acid (EPA) and docosahexaenoic acid (DHA), principal omega 3 polyunsaturated fatty acids (PUFA) present in fish oil, were shown to decrease osteoclast activation in-vitro. Topical application of bioactive products derived from N-3s in the presence of aspirin (ASA), which reduces enzymatic inactivation via acetylation. Confers dramatic protection against inflammation-induced tissue and bone loss from periodontitis in experimental models. Periodontitis is caused by the host response to infection not directly by a pathogen 3, 4. Tissue destruction in periodontitis can occur because of the interaction between dental plaque bacteria and the inflammatory immune response, which is induced by mediators such as arachidonic acid (AA) metabolites, cytokines, and enzymes. Lipopolysaccharide, a major virulence factor of gram-negative periodontopathogens, induces the release of AA metabolites via the cyclooxygenase and lipoxygenase pathways.

Accordingly, host modulatory therapy (HMT) has emerged as a new concept for the treatment of periodontal diseases. The goal of HMT is to reduce inflammatory processes as well as enhance wound healing and periodontal stability without impairing normal defense mechanisms or inducing inflammation. The variety of drugs which helps in host modulating therapy.

Endogenous Source: The mammalian brain contains considerable amounts of long-chain polyunsaturated fatty acids (LCP), which are derived from two parent fatty acids linoleic (18: 2w6) and linolenic (18:3w3) acids. Neither of these fatty acids can be synthesized de novo in the mammal and consequently have been termed the essential fatty acids, although only linoleic acid (18: 2w6) and its metabolites are essential in a man. However, interconversion between the two series of fatty acids does not appear to occur in the mammal. 7 Production of LCP takes place primarily in the liver, and they are probably transported in the plasma choline phosphoglycerides to the brain where they are preferentially absorbed in the developing mammal 8, 9. Arachidonic acids (20:4w6) and docosahexaenoic acid (22:603) are the two major LCP found in the human brain and are associated with the membrane phospholipids 10.

These n-3-NAE are synthesized in certain cells/tissues, after supplementing with fatty acids, which inhibits breast and prostate cancer cell growth 11.

Mechanism of Action: Periodontopathic bacteria induce inflammation of the periodontal tissues. The host inflammatory response to predominantly gram‐negative bacteria causes alveolar bone loss, which characterizes periodontitis. Omega‐3 PUFA has well‐recognized anti‐inflammatory properties. They dampen inflammation through multiple pathways. On the one hand, they inhibit the formation of omega‐6 fatty acid‐derived pro‐inflammatory eicosanoids like PGE2 and LTB4, and on the other hand, they can form several potent anti‐inflammatory lipid mediators like Resolvins and protectins. These together, directly or indirectly, reduce the production of pro‐inflammatory enzymes and cytokines, including Cox‐2, TNF‐alpha, and IL‐1beta 17.

They found that the arachidonic acid levels and prostaglandin E2 were reduced significantly in the gingiva and submandibular salivary glands of rats fed with omega‐3 fatty acids 15.

The effects of dietary fats on the inflammatory mediators in the alveolar bone. They found that these types of dietary lipids had a profound influence on the fatty acid composition of bone lipids. The arachidonic acid concentrations were significantly lower in the total phospholipids of the mandibles and maxillae of rats fed on the experimental diets than in those fed with the control diet. Arachidonic acid is a precursor of prostaglandin E2, and leukotriene C4, a significant reduction in its concentration may result in reduced levels of these eicosanoids in the alveolar bone 16. 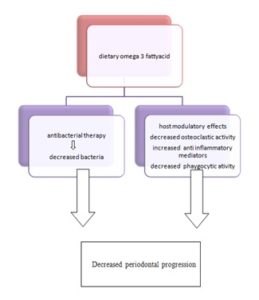 Effect of Omega 3 Fatty Acid in Periodontitis: Anti-inflammatory properties have been widely reported for n-3 polyunsaturated fatty acids (PUFAs), and some studies have been focalized on their possible role in the modulation of gingivitis and alveolar bone resorption in periodontal disease (PD). Increased formation of arachidonic acid-derived inflammatory eicosanoids and augmented oxidative stress are two molecular mechanisms pathogenetically involved in the progression of PD and known to be inhibited by n-3 PUFAs in PD on other molecular pathways and factors known to be altered in the development of PD and known to be subject to n-3 PUFA modulation in other pathological settings different from PD 18, 19.

This association between periodontal disease and u-3 FAs is probably explained by the systemic anti-inflammatory effects of u-3 FAs. In periodontal diseases, bacteria trigger inflammatory host responses that destroy the alveolar bone and periodontal connective tissue. Moreover, this local tissue- destructive immuno-inflammatory response produces proinflammatory immune mediators, such as interleukin-1, interleukin-6, tumor necrosis factor-a, and prostaglandin E2, that is dumped into the systemic circulation and subsequently may exert effects on distant organ systems. DHA and EPA are u-3 FAs found in oily fish and fish oils.

According to previous reports, DHA and EPA inhibit AA metabolism to inflammatory eicosanoids. They also give rise to mediators that are less inflammatory than those produced from AA or that are anti-inflammatory. Furthermore, several reports have indicated that the increase in dietary intake of DHA blocks inflammatory cytokine production. Consequently, dietary u-3 FA intake might contribute to the control of periodontal disease progression through its anti-inflammatory effects. Fish intake was positively associated with intake of u-3 FAs. Fish intake may, therefore, contribute to protecting against periodontal disease progression in the elderly 20, 21.

CONCLUSION: Omega‐3 fatty acids have a proven role in inflammatory changes and also has main role in reducing periodontitis. This mini-review is to understand the potential and possible favorable roles of omega‐3 fatty acids and their derivatives, in a periodontal disease situation.