ABSTRACT: Transdermal drug delivery system was first introduced more than 30 years ago. The technology generated tremendous excitement and interest amongst major pharmaceutical companies in the 1980s and 90s. By the mid to late 1990s, the trend of transdermal drug delivery system merged into larger organizations. Skin acts as a major target as well as a principal barrier for topical/transdermal drug delivery. Ethosomes are the ethanolic phospholipid vesicles which are used mainly for transdermal delivery of drugs. Ethosomes have higher penetration rate through the skin as compared to liposomes; hence, these can be used widely in place of liposomes. Ethosomes have become an area of research interest because of its enhanced skin permeation, improved drug delivery, increased drug entrapment efficiency, etc. The purpose of writing this review on ethosomes drug delivery was to compile the focus on the various aspects of ethosomes including their mechanism of penetration, preparation, advantages, composition, characterization, application and ethosomes. Characterizations of ethosomes include particle size, zeta potential, Differential Scanning Calorimetry, entrapment efficiency, surface tension activity measurement, vesicle stability, and penetration studies, etc.

INTRODUCTION: The skin is one of the most extensive and readily accessible organs of the human body, and the skin as a route of drug delivery can offer many advantages over traditional drug delivery systems including lower fluctuations in plasma drug levels, avoidance of gastrointestinal disturbances and first-pass metabolism of the drugs, and high patient compliance.

One of the greatest disadvantages to transdermal drug delivery is the skin's low permeability that limits the number of drugs that can be delivered in this manner. The skin offers an excellent barrier to molecular transport, as stratum corneum is the most formidable barrier to the passage of most of the drugs, except for lipophilic and low molecular weight drugs.

For transdermal and topical drug delivery system to be effective, the drug must be able to penetrate the skin barrier and reach the target site. During the past several decades, researchers have developed numerous techniques to weaken or disrupt the skin barrier and deliver drugs into the body through the intact skin. Chemical skin permeation enhancers, iontophoresis, sonophoresis, electroporation, micro-needles, and many other methods have been investigated to increase the efficacy of transdermal transport. Owing to their limited efficacy, resulting in skin irritation, the complexity of usage, and or high cost, none of these methods have been broadly applied to date. Lipid-based suspensions such as liposomes, niosomes, and microemulsions, have also been proposed as low- risk drug carriers, but they do not offer much value in transdermal drug delivery because they do not deeply penetrate the skin, but rather remain on the upper layers of skin strata. Several researchers have developed novel elastic lipid vesicular systems to deeply and easily penetrate through the skin.

Phospholipids, ethanol, bile salts, and many surfactants have been used to prepare these elastic vesicles. The high flexibility of vesicular membranes allows these elastic vesicles to squeeze themselves through the pores in stratum corneum, which are much smaller than their vesicular sizes. In 1992, Cevc et al., introduced the first generation elastic lipid vesicular carrier, transfersomes, mainly consisting of phospholipids and an edge activator (non-ionic surfactant). They were reported to penetrate intact skin and able to deliver the drug into and across the skin when applied under non-occlusive conditions 1. 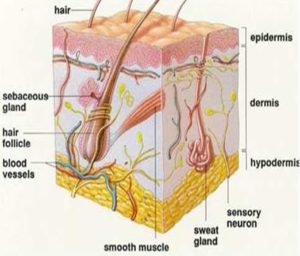 Ethosomes: They are mainly used for the delivery of drugs through the transdermal route. The drug can be entrapped in ethosomes which have various physicochemical characteristics, i.e. hydrophilic, lipophilic, or amphiphilic (Verma and Fahr, 2004; Bhalaria et al., 2009). Ethosomes are soft, malleable vesicles used for delivery of drugs to reach the deep skin layers and the systemic circulation. The size range of ethosomes may vary from tens of nanometers to microns (μ) (Patel, 2007). Ethosomes are the modified forms of liposomes that are high in ethanol content Fig. 2. The ethosomal system is composed of phospholipid (Phosphatidyl- choline, phosphatidylserine, phosphatidic acid), high concentration of alcohol (ethanol and isopropyl alcohol), and water. The high concentration of ethanol makes ethosomes unique because ethanol causes disturbance of skin lipid bi-layer organization, hence when incorporated into a vesicle membrane, it enhances the vesicles’ ability to penetrate the stratum corneum 2.

Mechanism of Drug Penetration: It is thought that the first part of the mechanism is due to the ‘ethanol effect’ whereby intercalation of the ethanol into intercellular lipids increasing lipid fluidity and decreases the density of the lipid multilayer. This is followed by the ‘ethosome effect,’ which includes inter lipid penetration and permeation by the opening of new pathways due to the malleability and fusion of ethosomes with skin lipids. Absorption of ethosomes is still not clear.

The drug absorption probably occurs in the following two phases:

Ethanol Effect: Ethanol is major ingredient and acts as a penetration enhancer during the skin. The mechanism of its penetration enhancing effect is well known. Ethanol interacts with lipid molecules in the polar hard group region, resulting in a reducing the rigidity of the stratum corneum lipids, increasing their fluidity. The intercalation of ethanol into the polar head group environment can increase the membrane permeability. In addition to the effect of ethanol on stratum corneum structure, the ethosome itself may interact with the stratum corneum barrier 7.

Ethosomes Effect: Increased cell membrane lipid fluidity caused by the ethanol of ethosomes results increased skin permeability. In the case of ethosomes encapsulating drugs, the higher positive zeta potential imparted by the drug can improve skin attachment of the vesicles. While encapsulated drug in classic liposomes remained primarily at the surface of the skin, the Ethosomal system was showed to be the highly efficient carrier for enhanced drug delivery through the skin due to increased fluidity of the lipids 3. 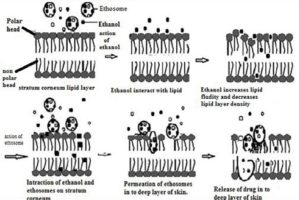 Cold Method: This is the most common method utilized for the preparation of Ethosomal formulation. In this method, phospholipid, drug, and other lipid materials are mixed. Propylene glycol or other polyol is added during stirring. This mixture is heated to 30 °C in a water bath.

The water heated to 30 °C in a separate vessel is added to the mixture, which is then stirred for 5 min in a covered vessel. The vesicles sizes can be decreased to desire extend using sonication or extrusion method. Finally, the formulation is stored under refrigeration Fig. 3.

Hot Method: In this method, the phospholipid is dispersed in water by heating in a water bath at 400 °C until a colloidal solution is obtained. In a separate vessel, ethanol and propylene glycol are mixed and heated to 40 °C. Once both mixtures reach 40 °C, the organic phase is added to the aqueous one.

The drug is dissolved in water or ethanol depending on its hydrophilic/hydrophobic properties. The vesicle size of ethosomal formulation can be decreased to the desired extent using probe sonication or extrusion method 5.

Entrapment Efficiency: The entrapment efficiency of the drug by ethosomes can be measured by the ultracentrifugation technique.

Transition Temperature: The transition temperature of the vesicular lipid systems can be determined by using differential scanning calorimetry.

Tension Activity Measurement: The surface tension activity of the drug in aqueous solution can be measured by the ring method in a Du Nouy ring tensiometer.

Vesicle Stability: The stability of vesicles can be determined by assessing the size and structure of the vesicles over time. Mean DLS measures size, and structure changes are observed by TEM.

Drug Content: Drug can be quantified by a modified high-performance liquid chromatographic method.

Penetration and Permeation Studies: Depth of penetration from ethosomes can be visualized by Confocal Laser Scanning Microscopy (CLSM).

TABLE 2:  EXAMPLE OF ETHOSOMES AS A DRUG CARRIER 8

CONCLUSION: The main disadvantage of transdermal drug delivery is the poor penetration of most compounds into the human skin. The main barrier of the skin is located within its uppermost layer, the stratum corneum. Ethosomal carrier gives opportunities and new challenges for the development of novel improved therapies.

Ethosomes has initiated a new area in vesicular research for transdermal drug delivery, which can provide better skin permeation than liposomes or hydroalcoholic solution. Ethosomes are soft, malleable vesicles and potential carrier for transportation of drugs. Ethosomes have been tested to encapsulate hydrophilic drugs, cationic drugs, proteins, and peptides. Further, research in this area will allow better control over drug release in-vivo and long term safety data, allowing the therapy more effective.