FORMULATION AND PREPARATION OF TRANSDERMAL PATCHES OF GLIMIPRIDE PART -2

FORMULATION AND PREPARATION OF TRANSDERMAL PATCHES OF GLIMIPRIDE PART-2

Recent advances in nanoparticulate systems for improved drug delivery display a great potential for the administration of a wide variety of active pharmaceuticals. The transdermal route, in particular, is an attractive candidate for the steady and sustained delivery of insulin into the blood.

Although the stratum corneum poses a significant barrier for protein absorption, once the protein passes through this barrier, the transdermal route offers several unique advantages. Firstly, proteolytic degradation of the drug is low because the skin contains relatively few proteases. Secondly, painless, noninvasive, and patient-friendly application of patches offers good patient compliance. Thirdly, patches are also easy to remove in the event of hyperinsulinemia 1, 2, 3, 4. The purpose of the present work was to develop a transdermal formulation of Glimepiride, which increases patient compliance and enhances the bioavailability by using polymers and permeation enhancers.

A. Optimization of Glimepiride variables.

a. Optimization of Lipid/Lecithin ratio

b. Optimization of Drug/Lipid ratio

B. Optimization of process variables

A. Optimization of Formulation Variables:

Optimization of Lipid / Lecithin Ratio: For optimization of lipids ratio, the SLN formulation were prepared with varying ratio of two lipids, i.e. tristearin and soya lecithin in the following ratio (like 1:0.5, 1:1, 1:1.5, 1.2% w/w) keeping other parameters constant Table 1 and Fig. 2. Optimization was drawn based on average particle size and polydispersity index (PDI) of SLNs, which was determined using Malvern Zetasizer.

Optimization of Drug / Lipid Ratio: For optimization of drug/lipids ratio, the SLN formulation F2 was selected, and different SLN formulation were prepared in different ratio gives in following Table 2 in % w/w of drug and lipid (tristearin and soya lecithin) keeping all other parameters constant. Optimization was drawn on the bases of average particles size of SLN and % drug entrapment. The drug entrapment efficiency was determined by centrifugation.

Optimization of Stirring Speed: Stirring speed of the stirrer was varied from 1000 to 4000 rpm for SLN preparation using the same formula of optimized formulation parameters and particle size and percentage drug entrapment was determined Table 4 and Fig. 5.

Optimization of Stirring Time: For the optimization of stirring time was selected while other process variables were kept constant.

The SLN dispersion was prepared with different stirring time 4hr given in following Table 5. Particle size and percentage drug entrapment were determined in Table 5 and Fig. 6.

C. Optimized Parameter: The optimization studies were accomplished on the SLN formulation and the parameters used for the preparation of this optimized formulation. 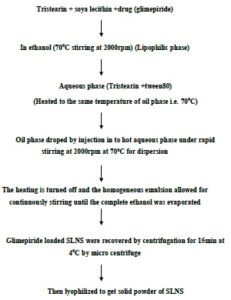 Characterization of the Solid Lipid Nanoparticle:

Scanning Electron Microscopy (SEM): 7 Surface morphology was determined by Scanning EM (Nano Nova SEM-AMPRI) at Sapience bioanalytical Research Lab. The sample for Scanning Electron Microscopy was prepared by lightly sprinkling the SLN powder on a double adhesive tape, which was stick on an aluminum stub. The Stubs were coated with gold to a thickness of about 300Aº using a sputter coated. All sample were examined under a scanning electron microscope at in acceleration voltage of 200 kv, and photomicrographs were taken at suitable magnification,

Transmission Electron Microscopy: 5 TEM was used as a visualizing aid for particle morphology. The sample (10 μl) was placed on the grids and allowed to stand at room temperature for 90 sec. Excess fluid was removed by touching the edge with filter paper. All sample were examined under a transmission electrition voltage of 100Kv and photomicrographs were taken at suitable magnification Fig. 9.

In-vitro Release of Glimepiride loaded SLN: 8 Glimepiride release rates from the solid lipid nanoparticles were investigated through. Dialysis membrane having a pore size of 2.4 nm and with a molecular weight cut off, 12,000-14,000 was used. The membrane was soaked in distilled water for 12h before mounting in a Franz diffusion Cell. Phosphate buffer saline (pH 7.4) was used as receptor fluid. The SLN was diluted by the addition of an appropriate volume of phosphate buffer Saline. 1 ml of diluted SLN was applied to upper donor chamber, and the temperature was maintained at 37 ± 5 ºC. An aliquot of 100 μl of the sample was withdrawn from the receiver compartment through side tube over 48 h. The fresh medium was replaced Glimepiride was calculated by determination of the amount of Glimepiride in the receiver medium.

Stability Study: The present study is desired to test the stability of Glimepiride loaded SLN Formulation. Stability test of SLNs was performed in term of particle size, zeta potential, and % entrapment efficiency during storage. The optimized formulation was stored in screw-capped amber colored small glass bottle at 4 ± 1 ºC, 25 ± 2 ºC, and 45 ± 2 ºC. Analysis of the sample was made Average particle size, zeta potential and % Entrapment efficiency after a period of 10, 20, 30 and 45 days under storage condition at 4 ºC, 25 ± 2ºC and at elevated temperature 45 ± 2 ºC Table 8, 9, 10 and 11.

Anti-diabetic Study: Anti-diabetic drugs are medicines developed to stabilize and control blood glucose levels amongst people with diabetes. Anti-diabetic drugs are commonly used to manage diabetes. Drugs used in diabetes treat diabetes mellitus by lowering glucose levels in the blood. There are different classes of anti-diabetic drugs, and their selection depends on the nature of diabetes, age and situation of the person, as well as other factors. There are several different types of anti-diabetic drug, including: Insulin Pramlintide (Amylin) GLP-1 receptor agonists (such as Byetta and Victoza). Oral hypoglycemics (tablets) Diabetes mellitus type 1 is a disease caused by the lack of insulin. Insulin must be used in type I, which must be injected. Diabetes mellitus type 2 is a disease of insulin resistance by cells. Type 2 diabetes mellitus is the most common type of diabetes. Treatments include (1) agents that increase the amount of insulin secreted by the pancreas, (2) agents that increase the sensitivity of target organs to insulin, and (3) agents that decrease the rate at which glucose is absorbed from the gastrointestinal tract.

A. Optimization of formulation variables

a) Optimization of lipid/Lecithin ratio

b) Optimization of Drug/Lipid ratio

a) Optimization of Stirring speed

b) Optimization of Stirring time

A. Optimization of Formulation Variables:

a) Optimization of Lipid / Lecithin Ratio: 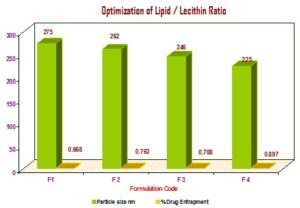 b) Optimization of Drug / Lipid Ratio: 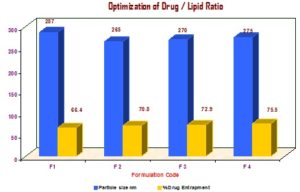 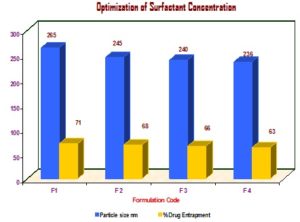 B. Optimization of Process Variables:

a) Optimization of Stirring Speed: 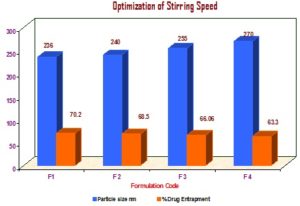 b) Optimization of Stirring Time: 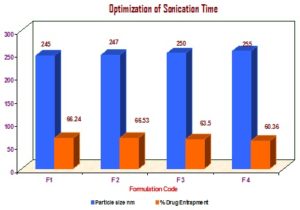 Particle Size, Polydispersity Index and Zeta Potential: Particle size of the nanoparticles is presented as -z-average diameter, which is mean hydrodynamic diameter of the particles. Particle size measurement was required to confirm the production of the particles in the nano range. The result indicates that particle size was significantly influenced by most of the formulation and process variables. The tristearin amount was kept constant in all formulations with varying amount of soya lecithin among all these formulations with the same amount of tristearin and soya lecithin was consider the ideal formulation. Then the formulation was selected with drug and lipid ratio with maximum % drug entrapment. Tween 80 was used as surfactant with varying concentration containing surfactant tristearin (1%), and tween80 (0.5%) was selected. The polydispersity index (P1) indicates the size of the particle size distribution, which ranges from 0 to 1. Among all formulations, f2 produced SLNs with the lowest PI and produced SLNs with high PI. Zeta potential (ZP) refers to the surface change of the particles. ZP (±) indicates the degree of repulsion between close and similarly charged particles in the dispersion. This repulsion force prevents aggregation of the particles. Therefore, ZP is a useful parameter to predict the stability of the solid lipid nanoparticles dispersions. The Zeta potential was found to be given in Table 8, 9, 10, and 11.

The smallest particle size of SLN in SEM image observed. The SEM studies are performed with a resolution of 2.00kv. A large no of particles has been observed in the SEM image in which same particles are smooth in the surface while some with rough in the surface. The smallest particle size observed in the image was well satisfying that the SLN is in a range, which was considered as the practical range of solid lipid nanoparticles. The drug release of Glimepiride loaded solid lipid nanoparticles imaging showed that Glimepiride. SLN revealed that the formulation of spherical nanoparticles with a smooth surface.

Transmission Electron Microscopy (TEM): The shape and surface morphology of optimized formulation Glimepiride lyophilized SLNs prepared via the solvent diffusion method were studied using TEM. In the TEM study, the size of the solid lipid nanoparticles was found range for all the samples. Drug/lipid ratio 15:100 particle size 265 ± 2.32 drug entrapment 70.8 ± 1.62. All the particles were found to be roughly spherical with a well-defined periphery.

The TEM imaging of optimized formulation. Glimepiride SLN was shown in photomicrograph 7.15. Drug/lipids ratio15:100. The particle size 265 ± 2.32 of Glimepiride SLN from TEM images accords with that from that form photon correlation Spectroscopy use of different concentrations of surfactant exhibited a spherical shape and had a narrow size distribution Drug entrapment 70.8 ± 1.62. The TEM image of the Montenegro L et al., 2012.

TABLE 9: EFFECT OF STORAGE ON THE PARTICLE SIZE, ZETA POTENTIAL AND PERCENTAGE ENTRAPMENT EFFICIENCY AT 4 ± 1 ºC

TABLE 10: EFFECT OF STORAGE ON THE PARTICLE SIZE, ZETA POTENTIAL AND PERCENTAGE ENTRAPMENT EFFICIENCY AT 25 ± 2 ºC

The result has been expressed as mean± SD (n=3)

TABLE 11: EFFECT OF STORAGE ON THE PARTICLE SIZE, ZETA POTENTIAL AND PERCENTAGE ENTRAPMENT EFFICIENCY AT 45 ± 2 ºC

The slow and sustained hypoglycemic response could be due to the slow release of the drug from SLN. In the orally treated group, the hypoglycemic effect was reduced up to 10 h, which could be due to its short biological half-life. The oral route produced severe hypoglycemia in initial hours, whereas there was no such effect in the case of transdermal patches. The pharmacokinetic parameters obtained with transdermal SLN patches were significantly (p<0.05) different from the orally treated group. This could be a fast absorption and short half-life whereas SLN through transdermal route showed the slow release of drug from lipid vesicles and maintained peak plasma concentration over a prolonged period.

Transdermal SLN system would also protect the formulation from dehydration and accidental damage, leakage of drug from SLN. Glimepiride is an anti-diabetic, oral hypoglycemic agent of meglitinide class used in the management of type II diabetes mellitus. In the present scenario, there are different dosage forms available in the market for diabetes mellitus. These dosage forms are either taken orally or parentally. Both types of dosage forms have their disadvantages, like in case of parenteral dosage form, the main disadvantage is patient compliance, and in case of oral dosage forms, they are taken after meal every time (2 to 3 time in a day).

CONCLUSION: Therefore, an attempt has been made to develop a nanoparticulate dosage form of Glimepiride with different lipid carriers and mixtures of surfactants. The nanoparticles were formulated by High-pressure homogenization. Prepared drug loaded SLNs were evaluated for particle size analysis, FTIR spectroscopy, DSC, Drug entrapment efficiency, SEM, and in-vitro release studies. An optimum lipid ratio (100:100) was selected as it showed an optimum size of 262 ± 3.33 nm and a PDI of 0.763 ± 3.6. As the concentration of lecithin was increased particle size also increased with an increase in PDI was observed; hence, an optimized ratio was selected.

The present research work could be concluded as successful development of solid lipid particles of an anti-diabetic drug Glimepiride using solid lipid (tristearin) and co-lipid (soya lecithin) by the solvent evaporation method. The Glimepiride loaded SLNs presented a suitable particle size, zeta potential polydispersity index, entrapment efficiency, and in-vitro drug release. The SEM and TEM images also revealed the formation of SLNs in nano-sized spherical particles with a smooth surface. The SLNs were more stable at 4 °C than 45°C; the particle size increased more with a decrease in entrapment efficiency at 45°C than 4°C.