PHARMACY ON CHIP: ELECTRONIC PILL AS A NOVEL TOOL AND TREATMENT APPROACH IN HEALTH CARE SYSTEM

PHARMACY ON CHIP: ELECTRONIC PILL AS A NOVEL TOOL AND TREATMENT APPROACH IN HEALTH CARE SYSTEM

ABSTRACT: The technological development is leading the human life to be comfortable. It is also gaining important attention as per health concern as it has enhanced the survival of the patients. The development in technology has become a boon to human beings. Electronic Pill is one such technology that is used to strive in opposition to deadly diseases by detecting diseases and abnormalities in the human body. These electronic pills are swallow-able or implantable in the human body to detect biological signals or capture images that are to be used for diagnostic and therapeutic purposes. The sensor-based electronic pills (capsules) are used in modern days to carryout complex treatments and hence, are called to be Pharmacy-on-chip (POC). The concept involves having simple electronic devices that include sensors, drug delivery systems, or tissue simulating tools powered by the batteries. The technology has a range of applications in the detection of disease and abnormalities in medical research. The overall aim has been to deliver enhanced functionality, reduced size, and power consumption, through system-level integration on a common integrated circuit platform comprising sensors, analog and digital signal processing and signal transmission.

INTRODUCTION: Ingestible analytical micro-systems have extended the application of lab-on-chip devices. There is now a great potential in making non-invasive microelectronics pills capable of monitoring physiological processes for identification of disease and abnormalities in the medical research field 1. A "Microelectronic pill" is a multichannel sensor based device that contains sensors or tiny cameras to collect information and data inside the body as they travel through the gastrointestinal tract before being excreted from the body a day or two later.

Moreover, it is the diagnostic tool used by the doctors where it becomes difficult to operate the patient manually and provide the treatment. A small miniaturized electronic pill can reach areas such as small intestine etc. and can transmit information such as acidity (pH value), pressure, temperature levels, dissolved oxygen in the gastrointestinal tract and also real-time images, videos wirelessly to an external console for further analysis. As per the study and clinical trials conducted on digestive disease week in May 2013 by Given Imaging (company) on an around 842 patient it was found that the sensitivity for electronic pills (pill-cam colon) was 88% and specificity was 82% 2. The U.S Food and Drug Administration passed an edible electronic sensor to keep track of a patient's health and medical concerns. Proteus Digital Health Inc. has developed a tiny digestible sensor that aims to transmit data to an online app to help and improve a patient's health.

Based on the function, electronic capsules are of two types - Actuators type and Sensors type. The actuators behave as drug delivery system whereas sensors sense the characteristic behaviors inside the body like temperature, heart-beat, pH levels, etc. The pill is designed to work in the duplex mode of communication. Transmitter present in the e-pill is used to transmit the signals from the sensors to nearby receiver where it is converted to the desired form for analysis.

System Structure: The system and design approach for the microelectronic capsule includes 4 important parts to carry out the task of monitoring, controlling, and transmitting information to the external console for further analysis and proceedings. A typical electronic pill with its basic building structure is shown as follows:

Silicon Diode: A micro-fabricated silicon diode is importantly used, and it is used to measure the body core temperature and is also used to identify local changes associated with tissue inflammation and ulcers.

ISFET: An ISFET is an Ion Sensitive Field Effect Transistor, used for measuring ion concentrations in solution. The change in current is a function of changing ion concentration. This means that when the ion concentration changes, current through the transistor also changes accordingly. An ISFET'S threshold voltage depends on the pH of the substance in contact with its ion-sensitive barrier. ISFET is used to measure pH values for the stomach acid and the intestine. It can reveal pathological conditions associated with abnormal pH levels.

Direct Contact Electrode: A pair of direct contact gold electrodes measure the conductivity and indirectly the contents of the stomach such as measuring the contents of water and salt absorption, bile secretion, and breakdown of collides in the GI tract. Gold has the best conductivity compared to other elements hence is used to give true values of conductivity measured.

The figure for the same is shown as under: 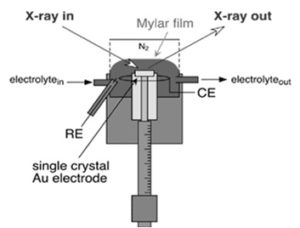 Three-E E Cell: A three-electrode electrochemical cell is the fourth sensor in an electronic pill. It is used to detect the level of dissolved oxygen and measures the oxygen gradient. It also investigates the growth of aerobic or bacterial infection in the small intestine and large intestine. It is also used to investigate the formation of radicals causing cellular injury and pathophysiological conditions like inflammation & gastric ulceration.

Control Chip: The control chip incorporates ASIC (Application Specific Integrated Circuit) as a control unit that controls the sensors and is also used to connect other components of the micro-system. Analog signal conditioning module is used to operate the sensors and analog to digital (ADC) and digital to analog (DAC) converters. Analog signals are sequenced through a multiplexer before being digitized by ADC.

Radio Transmitter: An integrated radio transmitter (transmitting antenna) is provided within the capsule that is importantly used to transmit the signals from the sensors. The data is transmitted to a local receiver. Size of the radio transmitter is about 8*4*3 mm.

Power Supply: Power Source is one of the most important needs for any system to work and perform. Here all the circuits are powered by two SR44 Silver Oxide (Ag2O) batteries that have operating time and working capacity of about 35 to 40 h.

The Overall internal structure block diagram for the E-pill is shown in Fig. 4. 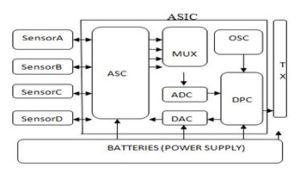 FIG. 4: INTERNAL ARCHITECTURE OF AN E-pill

System Work Approach (Method): The system (E-Pill) working approach refers to the combined actions performed by the basic building functional blocks. The useful data is collected by the ASIC (Application Specific Integrated Circuit) through sensors and the radio transmitter associated within the e-pill transmits all the data to the receiving end. Information is received by the receiving antenna and further to the receiving console. The modulation scheme employed in the radio transmitter is the Frequency Shift Keying. The early attempts were based on the low frequencies with simple system structures 1, 3.

However, a low frequency link requires large electronic components such as capacitors and inductors, which makes it difficult to realize a complete integrated system. After significant developments, advancement and improvements design of small size cameras and devices have become possible. Thus a high-frequency link is required for better resolution and a miniaturized system. The recent study 4 explains a prototyping system with the high data rate of 2Mbps for higher resolution image with 15 to 20 frames per second using compression techniques like JPEG and hence the transmitter itself reduces the power consumption. 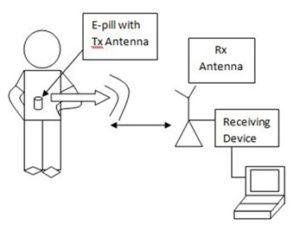 Advantages: The advantages of an electronic pill can be explained as follows:

CONCLUSION AND DISCUSSION: With the advent of advancing technologies in medicine and concerned research area, electronic pills have given a very fruitful result. It has great and beneficially influenced the detection of disease and abnormalities happening within the human body. This review paper focuses on the importance of electronic pill. Moreover, the methodology used in its overall functioning has been discussed that includes the transmission of collected information for analysis operation. The generic nature of the electronic pill has made it highly adaptive and is used in quick detection of complex diseases which would otherwise take a long time.

Future Scope: Future aspects and scope of the system   implementation can be done in context to the following considerations:

ACKNOWLEDGEMENT: The author is grateful to the organizers of the national conference entitled ‘Novel Tools and Treatment Approaches in Health Care System’ for selecting my paper for poster presentation, organized at Faculty of Pharmacy, Integral University, Lucknow on 3rd March 2015. The earlier studies and work by the respected researchers made this review possible. The author is also thankful to the co-authors for their guidance in completing this review on time.