ABSTRACT: Polygonum flaccidum commonly known as Lalbishkatali is an annual herb, native to Bangladesh, and well known for its analgesic, anti-inflammatory, diuretic, purgative and insecticidal properties, and also for its use against snake-bites. This article provides the collective information about the phytochemical constituents isolated from this plant used in the modern scenario for the treatment of various ailments like acylflavone, α-santalene, caryophyllene oxide, borneol, sitosterin, naphtha, and stigmasterol. Here, we have reviewed all the reported pharmacological properties such as analgesic, anti-inflammatory, diuretic, purgative, insecticidal, antidiarrhoeal, antimotility and antidepressant properties, and some other activities.

INTRODUCTION: Plants are seeking attention due to its potent diversified medicinal activities, having the capabilities of exploiting numerous human afflictions since primordial period. Both in developed and developing countries progressive demand for traditional medicines are explored by scientific research. Dependency on several medicinal plants in initial healthcare results due to extensive biological and medicinal activities, higher safety profile, and minimum costing. To illustrate, Bangladesh, being a developing country, utilizes the benefits of using herbal medicines by blending all its positive aspects to cure different ailments 1.

An aquatic annual medium sized herb named Polygonum flaccidum has successfully attained the worth of being a potent medicinal plant. It belongs to the family of Polygonaceae. The genus name is from the Greek poly = "many" and gonu = "knee" or "joint," about the swollen jointed stem2. Polygonum flaccidum, which is a traditional Chinese herbal medicine, had found to show an elevated utilization as a pesticide, medicine, veterinary drug as well as food additives. To be more focused, the plant is familiar for its analgesic, anti-inflammatory, diuretic, purgative and insecticidal properties 3, 4, 5.

Furthermore, traditionally, the plant is used as an ailment for snake-bites. Later on, a subsequent study on this particular species successfully proved to be efficient for antidiarrhoeal, the antimotility and antidepressant activity of crude ethanol, methanol and petroleum ether extracts of the plant and is still under investigation to search logical evidence for its folk use and further exploitation 6. The following is a comprehensive and up-to-date review about the distribution, phytochemistry, and pharmacological properties of Polygonum flaccidum with an urge of further advancements in the medicinal uses of the herb worldwide.

Botanical Description: Polygonum flaccidum is an annual, a medium-sized herb. Its Stems are erect, sometimes prostrate, rooting at the joints, often glandular. Its joints are often swollen; branched. Leaves are 5-11 cm long, lanceolate or oblong-lanceolate, apex pointed, midrib with minute hairs. The stipules are of 1cm, tubular, swollen near the middle, fringed with short bristles. Flowers are pink or red, in very slender, 5-8 cm. long racemes. The plant contains five calyx whichis segmented, glandular and has six stamens.

It basically possesses different styles, style 2-3, free; sometimes nuts are circular and flattened in 2-styled flowers, and 3-angled in 3-styled flowers. The plant is generally distributed over tropical Africa and tropical Asia. Apart from this, the plant is found in Japan, Korea, China, Taiwan, Indonesia, Malaysia, Bhutan, and India. Being recognized as an aquatic plant, it favored wet habitat, moist condition and found in pond sides 2.

Phytochemical Constituents: Considerable work has already been done to identify and isolate the chemical constituents from different extracts of Polygonum flaccidum. Numerous studies have exposed that different extracts of Polygonum flaccidum contain several bioactive compounds including acylflavone, α-santalene, caryophyllene oxide, borneol, sitosterin, and stigmasterol. The potent bioactive compound named α-santalone has been identified by the aerial parts of P. flaccidum when extracted with methanol 4. 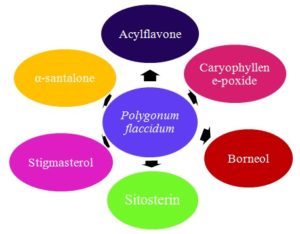 Pharmacological Activities: Polygonum flaccidum possesses several pharmacological effects, having numerous potent active phytochemical constituents. From the methanolic extract of the aerial parts of P. flaccidum significant analgesic and diuretic activities were assessed due to having the principal active constituent α-santalone 3 by using acetic-acid-induced writhing method and the Lipschitz test respectively 7-13. Ahmed and his colleague 4 reported that the plants have analgesic, anti-inflammatory, diuretic, purgative, and insecticidal properties. Subsequent studies showed evidence that the crude methanol, ethanol, and petroleum ether extract of P. flaccidum successfully confirmed antidiarrhoeal, antimotility, and antidepressant activity. Suspected aerial parts of the ethanolic extract of plant P. flaccidum were found to be had antidiarrhoeal and antimotility and the crude methanol extract of the plant produced significant antidepressant activity than the EEPF and PEPF 6. 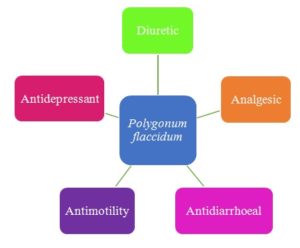 CONCLUSION: The present review indicates the importance of P. flaccidum (Lalbishkatali), as one of the classical medicinal plants. It is believed that the detailed information as presented in this review on its phytochemistry and various biological properties of the extracts and the constituents might provide an incentive for proper evaluation of the use of the plant in medicine and agriculture. The pharmacological activities are yet to be further evaluated and especially on α-santalone, which have been shown analgesic and diuretic effects in mice.