INTRODUCTION: Metformin hydrochloride (MET) Fig. 1 is an oral anti-diabetic drug, which reduces the elevated blood glucose concentration in patients with diabetes but does not increase insulin secretion. It does not lower the blood glucose in nondiabetic subjects 1. Metformin HCl decreases hyperglycemia by suppressing glucose production by the liver (hepatic gluconeogenesis).

It's Chemical Name is 1,1-Dimethyl biguanide. It is official in IP 2, USP 3 and other official books 4, 5. Literature survey revealed an estimation of metformin by HPLC 6, 7, 8.

Empagliflozin (EMP) Fig. 2 is an antidiabetic drug. Its chemical name is (2S, 3R, 4R, 5S, 6R)-2-[4-Chloro-3-[[4-[(3S)-oxolan-3-yl]oxyphenyl] methyl] phenyl]-6-(hydroxymethyl) oxane-3, 4, 5-triol.  Empagliflozin is a drug of the gliflozin class, approved for the treatment of type 2 diabetes in adults in 2014. Empagliflozin is an inhibitor of the sodium glucoseco-transporter-2 (SGLT-2), which is found almost exclusively in the proximal tubules of nephrotic components in the kidneys 9.

Various analytical methods were reported in the literature for the determination of empagliflozin in pure drug, pharmaceutical dosage forms and biological samples using High-performance liquid chromatography 10, 11, Ultra performance liquid chromatography 12, either in single or in combined forms. Literature survey revealed estimation of Empagliflozin in combination with Metformin by HPLC was carried out by a few researchers 13, 14.

Reagents and chemicals: The pharmaceutical drug samples Metformin and Empagliflozin were obtained from Spectrum Pharma Pvt. Ltd, Hyderabad. All the chemicals used in HPLC grade.  The pharmaceutical dosage form SYNJARDY-XR was purchased from a local pharmacy. The solvents used in this work were of HPLC grade and obtained from Merck Specialties Private Limited, Mumbai. Milli Q Water was used in the buffer preparation.

Chromatographic Conditions: The column used was Kromasil C18 (250mm×4.6mm, 5μm particle size) for analytical separation. The mobile phase consists of an aqueous solution of 0.1% orthophosphoric acid and acetonitrile in the ratio of (45:55 v/v). The flow was adjusted to 1.1ml/min. The instrument was operated at ambient temperature. The injection volume was 10μL. The UV detection was achieved at 226 nm, which is the isosbestic point of both the drugs.

Preparation of 0.1%OPA Buffer Solution: 1ml of  Orthophosphoric acid was pipetted out and dissolved in a 500ml of Milli-Q water taken in a 1000ml Volumetric flask, and final volume was made up to the mark with Milli-Q water.

Preparation of Mobile Phase: Mixture of buffer and acetonitrile taken in the ratio 45:55 v/v was degassed in an ultrasonic water bath for 10min and filtered through 0.45µ filtered under vacuum filtration.

Diluent Preparation: Mixture of Water and acetonitrile were taken in the ratio 50:50 v/v was used as diluent.

Preparation of Sample Solution: Twenty tablets were weighed accurately and finely powdered. A quantity of tablet powder equivalent to 500 mg of Metformin and 12.5 mg of Empagliflozin was accurately weighed and transferred into a 100 ml volumetric flask. 50 ml of the mobile phase was added to the volumetric flask and ultrasonicated for 25 min; the volume was made up to the mark and mixed well. The solution was filtered through a 0.2 μm filter to ensure the absence of particulate matter (sample stock solution). From the filtered solution, 1ml was pipetted out into a 10 ml volumetric flask and made up to 10 ml with diluent get the concentration of 500 ppm and 12.5 ppm of Metformin and Empagliflozin.

Specificity: The specificity was carried out to determine whether there is any interference of any impurities (presence of components may be unexpected to present) in the retention time of analytical peak 16. The specificity of the method was determined by checking the interference of any of the possible degradation products generated during the forced degradation study of the drugs. The forced degradation of the drug was carried out with 2 N HCl, 2 N NaOH, 20% v/v hydrogen peroxide, heat (80°C) and photolysis (365 nm) for determining the stability nature of the drugs. The degradation samples were prepared by taking suitable aliquots of the drug and drug product solutions and then undertaking the respective stress testing procedures for each solution. After the fixed period the treated test solutions were diluted up to the mark with diluent.

Forced Degradation Studies: From the filtered sample stock solution 1 ml was pipetted out into a 10 ml volumetric flask and made up to 10 ml with diluent. For every stress condition, three sample solutions were prepared at a 500 ppm concentration of MET and 12.5 ppm of EMP. This sample solution is subjected to the following stress conditions.

Alkali Degradation Condition: Alkali degradation was carried out by adding 5 ml of 2N NaOH, and after 45 min neutralizing the mixture by adding5ml of 2N HCl.

Linearity: Express ability to obtain test results where directly proportional to the concentration of an analyte in sample 17. The linearity of the proposed HPLC procedure was evaluated by analyzing a series of different concentrations for each of the two analytes. The linear regression equations were generated by least squares treatment of the calibration data. Under the optimized conditions described above, the measured peak areas were found to be proportional to concentrations of the analytes. Table 1 presents the performance data and statistical parameters, including linear regression equations, concentration ranges, correlation coefficients.

A stock solution of 1000 ppm of two analytes was prepared with diluent. From it, various working standard solutions were prepared in the range of 125 to 750 ppm and 3.12 to 18.75 ppm for MET and EMP respectively and injected into the HPLC system. It was shown that the selected drugs had linearity in the stated range. The calibration plot (peak area versus concentration) was generated by replicate analysis (n=3) at all concentration levels, and the linear relationship was evaluated using the least square method within the Microsoft Excel program. The retention time of standards was 2.182 min for MET and 2.908 min for EMP. A typical HPLC chromatogram of the standard mixtures is shown in Fig. 3.

Accuracy: Accuracy was determined by the standard addition method in terms of percentage recovery. The accuracy study was performed for 50%, 100% and 150 % of MET and EMP. Standard and sample solutions were injected into a HPLC system in triplicate, and percentage recoveries of MET and EMP were calculated. The area of each level was used for calculation of % recovery Table 2. In standard addition method 50%, 100% and 150 % of standard solutions were spiked with a known amount of optimized concentration of the drug. The amount recovered is calculated by subtracting the known optimized concentration of the drug.

Precision: Express the closeness of agreement between the series of measurement obtained from multiple sampling of the same homogeneous sample under the prescribed conditions. The precision of the method was ascertained from the peak area obtained by actual determination of six replicates of 500 ppm and 12.5 ppm of Metformin and Empagliflozin respectively.

The precision of the assay was also determined in terms of intra- and inter-day variation in the peak areas of a set of drug solutions on three different days.  The intra and inter-day variation in the peak area of the drug solution was calculated in terms of relative standard deviation (RSD). The system precision values and method precision values are shown in Table 3 and Table 4.

Robustness: Robustness of the method was demonstrated by deliberately changing the chromatographic conditions 18. Robustness is defined as the influence of small, deliberate variations in procedure variables like flow rate (±5%), temperature (±5˚C), and change in wavelength (±5nm). The robustness was performed for the flow rate variations from 0.8ml/min to 1.2ml/min, and the method is robust only in less flow condition and even by a change in the mobile phase ±5%. The %RSD values for robustness study was found to be less than 2%, which indicates the method is robust.

System Suitability: System suitability tests are an integral part of the chromatographic method, which is used to verify the reproducibility of the chromatographic system. To ascertain its effectiveness, certain system suitability test parameters were checked by repetitively injecting the freshly prepared standard stock solutions at the concentration level 500 ppm and 12.5 ppm of Metformin, Empagliflozin respectively to check the reproducibility of the system and the results are shown in Table 6.

Stability of Solutions: The stability of standard working solutions, as well as sample solutions in distilled water, was examined, and no chromato-graphic changes were observed within 24 h at room temperature. Retention times and peak areas of the drugs remained unchanged, and no significant degradation was observed during these periods.

Detection and Quantification Limits: According to the pharmacopoeial recommendations (USP, 2011), the limit of detection is defined as the concentration that has a signal-to-noise ratio of 3:1, while for a limit of quantification, the ratio considered is 10:1. 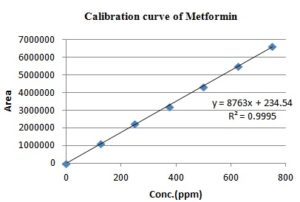 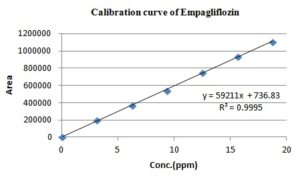 RESULTS AND DISCUSSION: The present investigation reported is a new RP-HPLC method development and validation of simultaneous estimation of MET and EMP. The method developed was proceeded with wavelength selection. The optimized wavelength was 226 nm. To get the optimized RP-HPLC method, various mobile phases and columns were used. From several trials final method is optimized with the following conditions: The mobile phase consists of 0.1% orthophosphoric acid buffer and acetonitrile in the ratio of 45:55%v/v and the column used was Kromacil C18 column (250mm×4.6mm, 5μm particle size). The flow rate was adjusted to 1.1 ml/min. The instrument was operated at ambient temperature. The UV detection was achieved at 226nm. The injection volume was 10 μL. The linearity was determined as linearity regression of the claimed analyte concentration of the range 125 to 750 ppm and 3.12 to 18.75ppm for MET and EMP respectively. The correlation coefficient was found to be 0.999, and 0.999 for MET and EMP, respectively.

The precision of the method was ascertained from determinations of peak areas of six replicates of the sample solution. The %Relative Standard Deviation for method precision was found to be 0.5 and 0.6 for MET and EMP, respectively.

The accuracy study was performed at 50%, 100%, and 150%. The %RSD values of MET and EMP was 100.59 and 100.07% respectively. The system suitability parameters like theoretical plates (N), tailing factor (T) were calculated and were found to be more than 2000 and not more than 2 and ascertained that proposed RP-HPLC method was accurate and precise.

CONCLUSION: The proposed method was found to be simple, precise, accurate, and rapid for determination of Metformin and Empagliflozin from the pharmaceutical dosage form. The method was validated for parameters like specificity, linearity, accuracy, precision, robustness, and system suitability values were found to be within limits. The method has significant advantages, in terms of shorter analysis time, selectivity, and accuracy than previously reported. The validation study indicates that the method can be considered suitable for carrying out quality control and routine determination of Metformin and Empagliflozin in bulk and pharmaceutical tablet dosage form.